Hearing those wedding bells ring can cost a small fortune. If you’re planning a wedding, you’ve likely heard the number – according to The Knot’s 2018 Real Wedding Study, the average wedding cost in the U.S. is $33,391. As one might imagine, the costs of wedding attire, centerpieces, and renting out a venue add up quickly.  […] 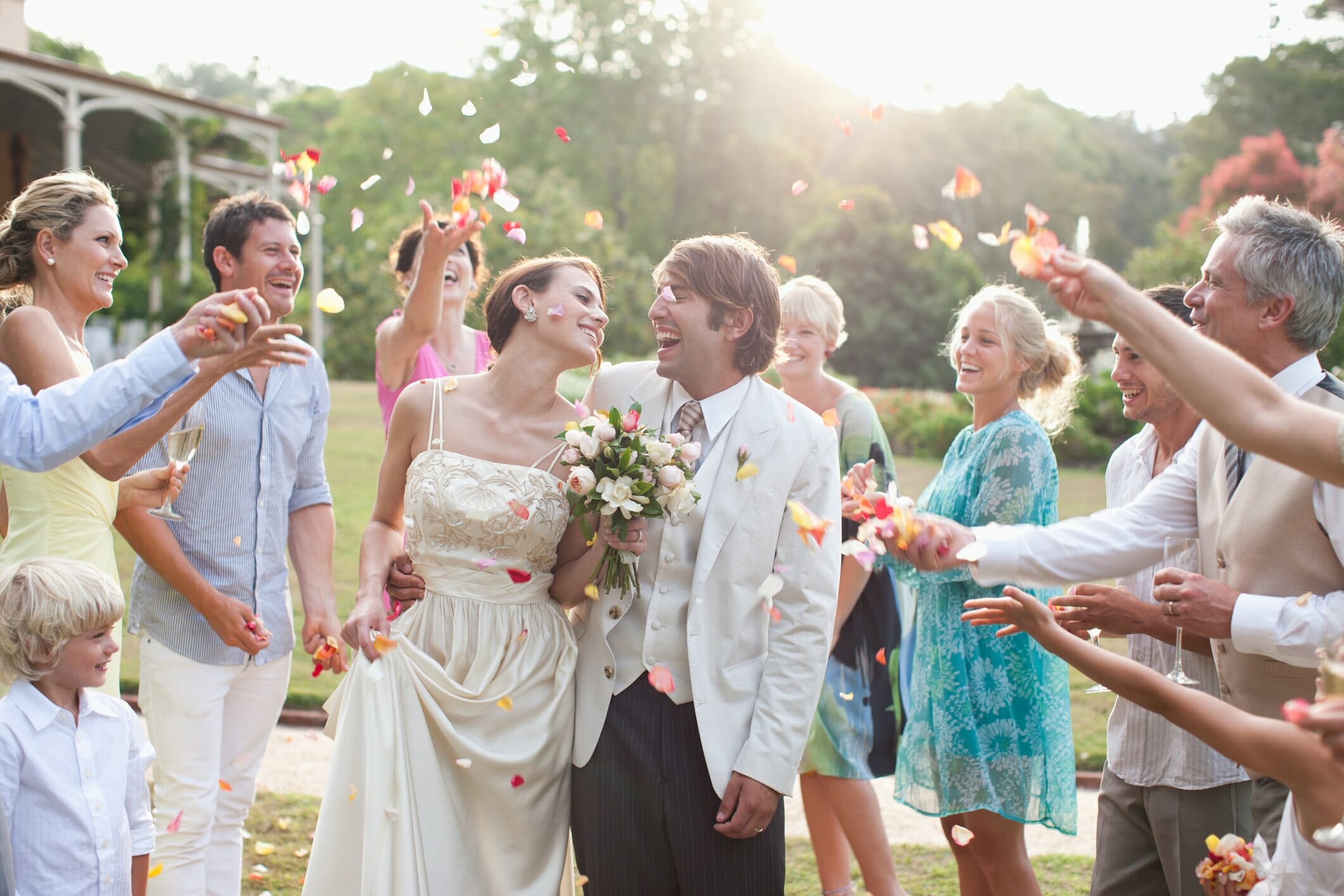 Hearing those wedding bells ring can cost a small fortune. If you’re planning a wedding, you’ve likely heard the number – according to The Knot’s 2018 Real Wedding Study, the average wedding cost in the U.S. is $33,391. As one might imagine, the costs of wedding attire, centerpieces, and renting out a venue add up quickly.

So how can you get hitched for less and save money?

How To Plan a Wedding on a Small Budget

Here’s how three couples had weddings on a budget, and how you can do it, too.

Have a low-key and intimate affair

When Lance Cothern and his wife Victoria got married in 2013, they had just graduated from college and didn’t have a lot to spend on their wedding. Victoria was saddled with $80,000 in student loan debt from nursing school. To focus on aggressively paying it off, they decided to keep their own wedding planning to a shoestring budget of $5,000.

The couple got married in a park in Panama City, Florida. There were 30 guests, and the reception was a relaxed gathering at a brunch restaurant that was nestled in a strip mall.

Their top tip: Save on photography. Besides having a small wedding, the couple negotiated with their photographer and spent only $800, which included digital copies and printing rights to all their photos. Since their wedding was on a weekend morning, the photographer was able to fit them around other clients. In turn, she was open to a lower rate.

Plus, they cut down on photography time by having her shoot the ceremony only.

“We still got amazing pictures from a top notch photographer for a bargain,” says Cothern, who is a personal finance expert and founder of Money Manifesto.

Make it simple, yet fun

Virginia Elder and her husband were both in their early 20’s when they got married in 2005. Having just bought their first house together earlier that year, they didn’t have a ton of cash for a huge wedding with a big guest list and lots of expenses.

The couple had a very non-traditional wedding at the Justice of the Peace on a weekday. The only guests in attendance were their friends and immediate families. To stick to a wedding dresses budget, Elder wore a white sundress — which she bought for $14 on clearance at Sears — and her husband wore one of his father’s suits. Her shoes were borrowed, and they held the reception at their recently purchased home.

Their top tip: Ask guests to provide food and furniture for the big day. Guests brought their own chairs, drinks, and food items to throw on the grill for their BBQ. And their wedding cake was a single-layer sheet cake from Sam’s Club with a wedding topper from The Dollar Store.

“We got married so young, and looking back, we really had no idea what we were doing,” says Elder.

“We were just in love and nothing else mattered. So we focused on what was important to us, and that was simply that our friends and close family were there to celebrate.”

When Sheridan Roush and her husband decided to get married in 2015, they had just spent four years in Beijing working as English school teachers. As they were starting from scratch, they would need money to find an apartment, buy a car, and start a new life in the States. Roush’s mom gave them $10,000 to use however they wanted.

They had an outdoorsy, country chic wedding in West Virginia in 2015. Their biggest priorities? Good food, drinks, and a solid photographer to capture the day. “Once we determined what our big money items were going to be, everything else we built around that.”

Their wedding had about 70 guests, which included two photographers. The couple spent $7,000 on their wedding, and half of it went toward photography costs.

The venue for the reception, which was a local community center, cost $150 for a total of three days.

“Get married somewhere that isn’t necessarily a wedding place,” suggests Roush. “That way you have more wiggle room to do things on your own.”

Their top tip: Enlist the help of your friends and family. Roush’s husband designed the wedding invitations, and she printed them on card stock herself. A few friends came over their place to paint the invitations. Another pal helped create decorations and centerpieces. Aside from the flowers, the decorations were free.

To save on the food bill, the couple had her family member’s restaurant provide the catering, which was offered at cost. They purchased local wines and a keg of local beer, and had guests help themselves at cocktail hour, saving on any open bar fees. For their wedding cake they served homemade blackberry cobbler, courtesy of their mom’s friends.

Stick to essentials the second time around

Kelsi Gard and her husband had been both been married before, and threw big-budget weddings in the past. They realized that spending all that money didn’t equate to lasting marriages. As a result, they both wanted a simple second wedding, and ended up spending only $2,000.

They got married in a church in 2016, and the ceremony lasted about 15 minutes. The ceremony was held in the late morning, followed by a lunch reception.  For their wedding venue, they rented a pavilion in the park for $345.

“We didn’t have a wedding registry because we have everything we need,” says Gard, who is a videographer.

“Everyone sat around one big table and my husband and I toasted everyone by sharing why each guest was special to us.”

There was no wedding party, Gard did her own makeup, and her sister helped her curl her hair for the big day. Gard wore a summer dress she got on clearance for $45, and flats she already owned. The couple sent a total of 10 invitations and had 18 guests. As for food, they ordered a tray of their favorite lasagna and garlic bread. Appetizers and libations were brought in by the bride or her family. In lieu of a wedding cake, they enjoyed brownies.

While they hired a photographer friend to snap photos, they didn’t get a videographer or wedding planner. “Hiring a videographer is expensive and unnecessary,” says Gard, who is a videographer herself. “Your guests can film stuff with their phones and it will be more than enough. People will feel more at ease being filmed by someone they know rather than by a pro, anyway.”

Decide what matters most

Having a wedding budget doesn’t mean skimping to the point where your day isn’t fun or memorable. By figuring out what matters most to you and your partner, you can get married on a budget without sacrificing the parts that make it special to you. 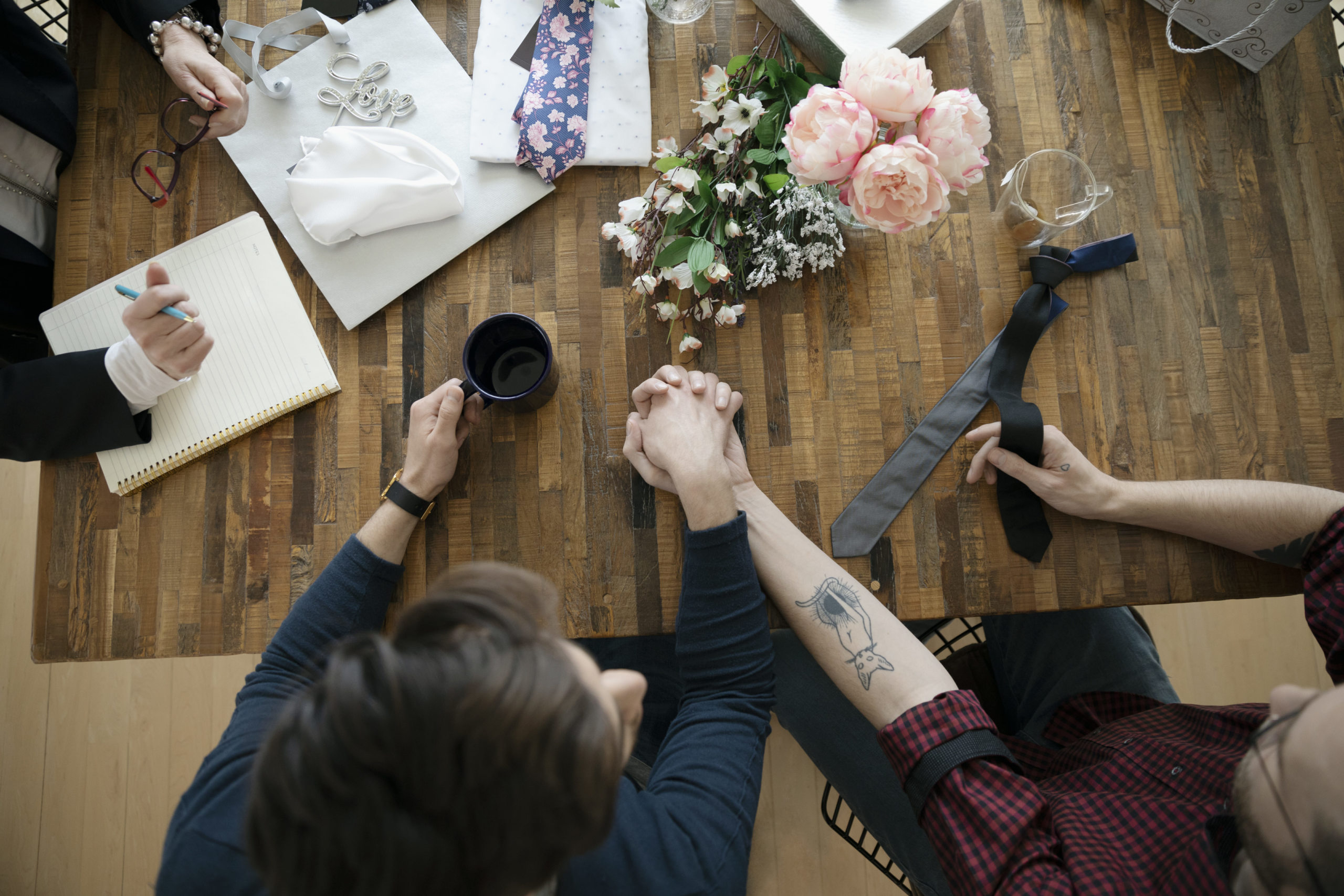 How To Pay For Your Wedding 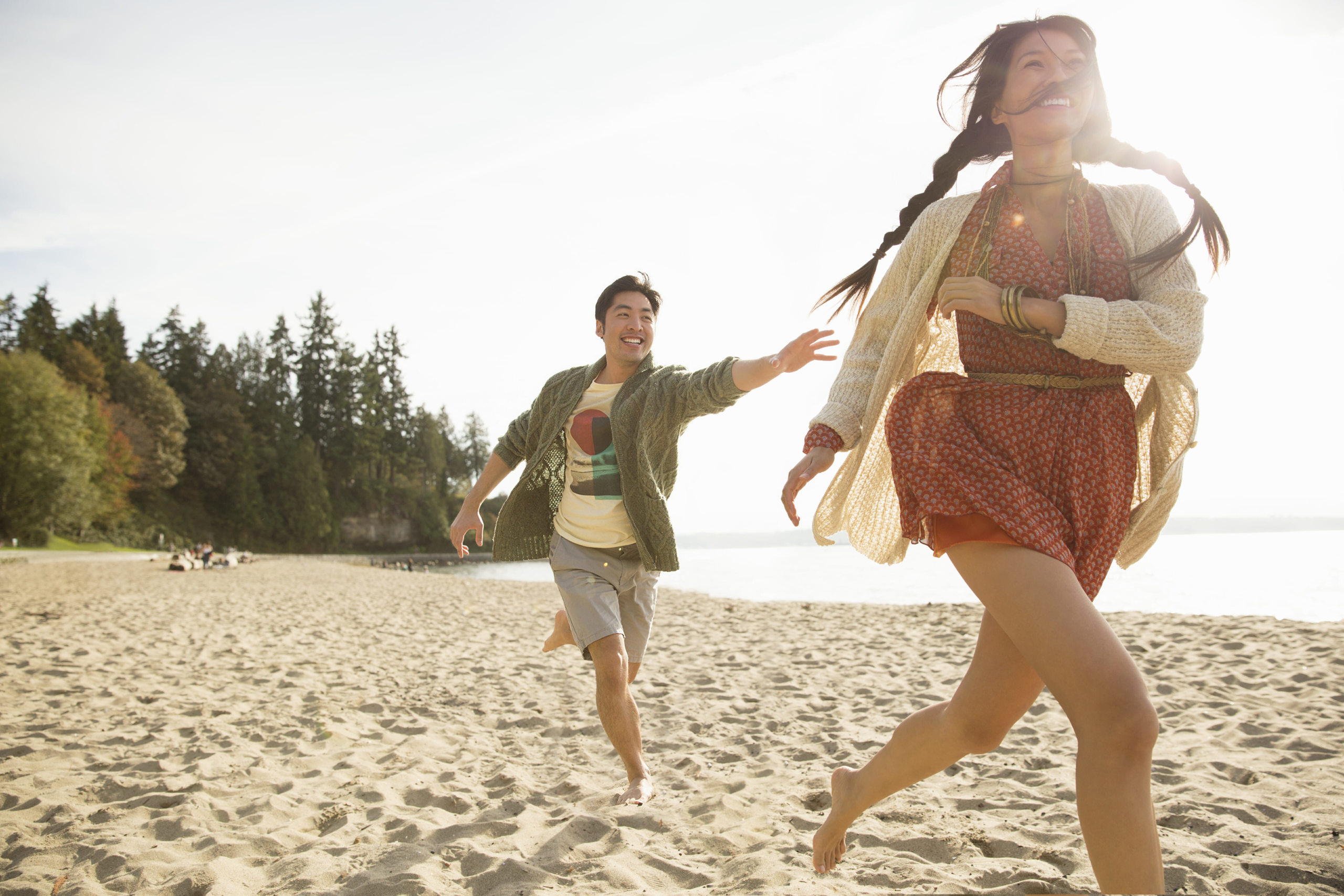 How To Have the Perfect Honeymoon on a Budget 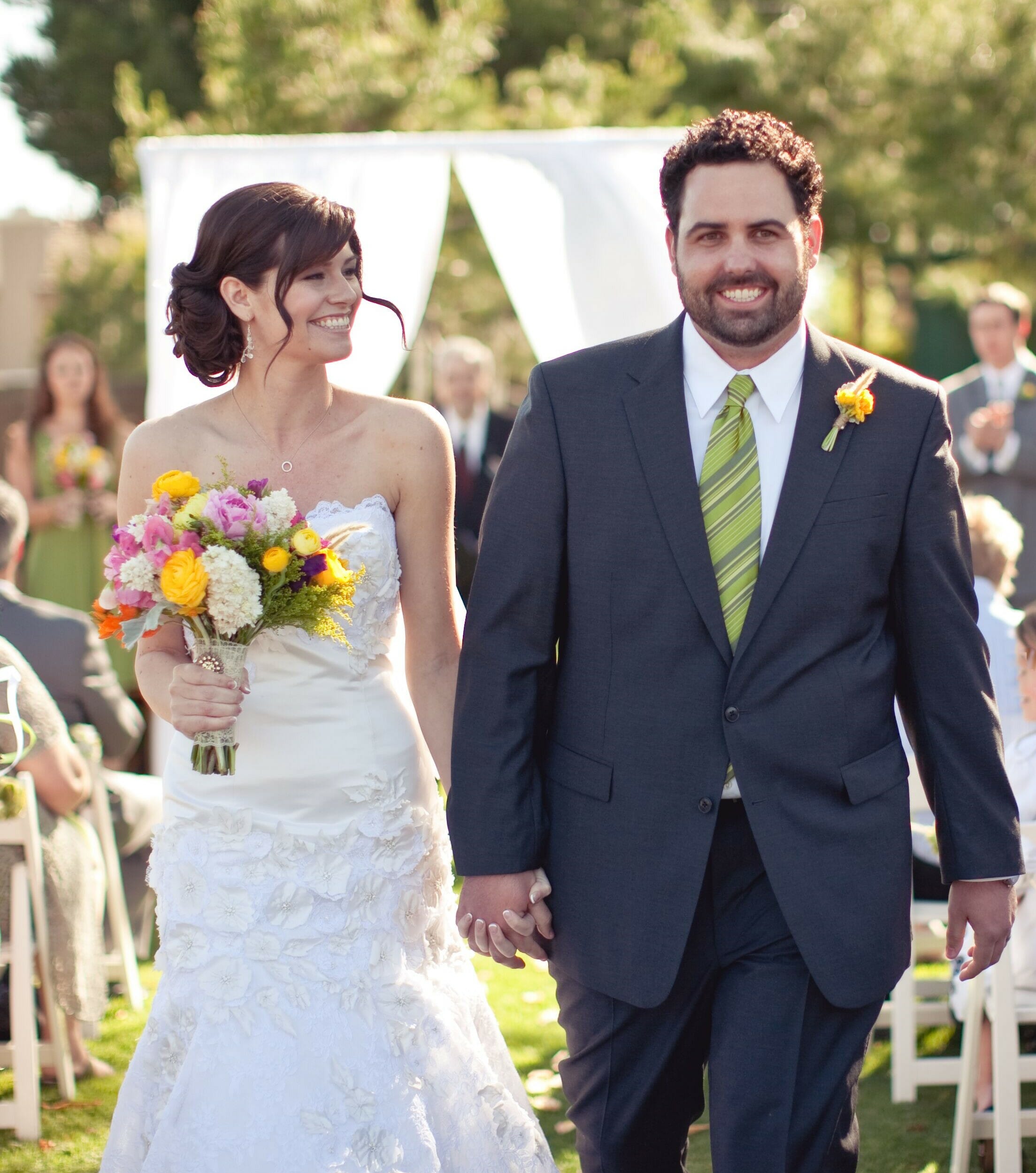